An intelligent transportation system (ITS) is an advanced application of ICT in the transport sector providing ‘Smarter’ methods to make travel a more safer & coordinated experience to the public. It involves advanced networking technologies, thereby interfacing with other applications such as traffic management, Parking management etc. to provide amenities at the transit stations.

The system consists of three modules

The Bus is equipped with GPS facility. An integrated unit comprising of GPS Receiver and GPRS/GSM data transmission functionality are housed inside the bus. GPS calculates the location coordinates and transmits the same to the server in CCC via the GPRS or GSM. This data is received in real time at the respective bus station, which is dynamically updated on the LED screen and relayed through speakers. Additional information such as the arrival time, route, destination, fare, bus loading condition etc. are also available.

The data is sent to the bus shelter module via GSM and displays the bus position on the LED screen.

Generally, two (2) nos LED Screens are proposed at the Bus shelter. The size of the LED panels may vary depending on the type of shelter.

The first LED screen has an In-built light sensor which controls the brightness and the intensity of the display based on ambient light conditions. It displays the transit information such as the Vehicle location, “NEXT BUS” information, route and the arrival time to the bus station.

The interactive advertising methods being adopted in public spaces tend to capture the attention of the audience and are found to be effective in attracting customers. In smart bus shelters, the screen is activated with motion detectors and the information displayed is based on time & location. Such a facility is beneficial to the outdoor media companies that rely heavily on advertisements in public spaces, adding value to different stakeholders from different perspectives ie commuters.

Security Cameras: Each Bus shelter shall be equipped with one (1) no. robust IP Bullet Camera with infrared and one (1) no. IP dome camera. The mounting of the cameras must be suitably chosen to provide full coverage of the bus shelter inside & outside. The cameras, requiring electrical and network connections, are mounted on structures such as the light poles.

Presently, the bus fares are either paid in cash or pre-printed ticket. However, smart cards are being proposed by many transit agencies to reduce cash handling. The validity of the smart cards is checked when the customer boards the bus.

The ATVM is located inside the bus shelter at one side and is provided in all shelters.

Digital Public Address Systems:  Digital public address systems with features such as paging, background music, transit announcements, or emergency announcements are provided to announce the arrival & departure of buses. Speakers are mounted on the inner side of the roof or on the side pole to cater to announcements for the visually impaired.

WiFi:  Many commuters and students use their laptops, tablets & mobiles while they are waiting for the bus to arrive. The Wifi hot spot will enable them to work and also receive the transit information directly on their wireless devices.

USB port: Each bus shelter can have 2 or 3 USB ports on either sides & back of the bus shelter.

Panic Push button:1 No. Panic push button housed below the LED display inside the bus shelter.

Power Supply: It can be either solar or public. If solar, in this case power supply is generated from solar panels placed on the top and are supported by batteries for maintaining uninterrupted power supply.

Communications Enclosures and Equipment: Networking equipment such as routers, modems, switches & power supplies need to be housed in an enclosure. The enclosure should be secure, constructed of Stainless steel for corrosion resistance and located out of range of irrigation overspraying. It should ensure to provide enough maintenance space for the technician to work with the doors open.

The connectivity with the CCC is summarised in the below table: 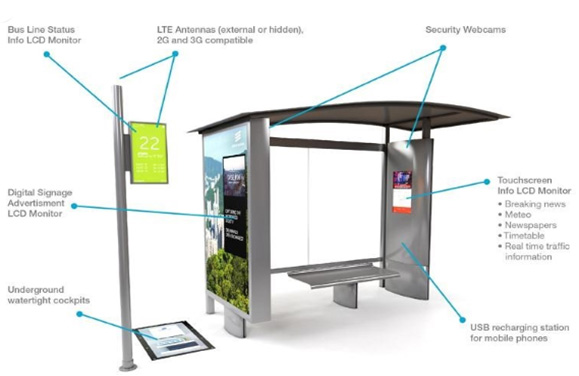 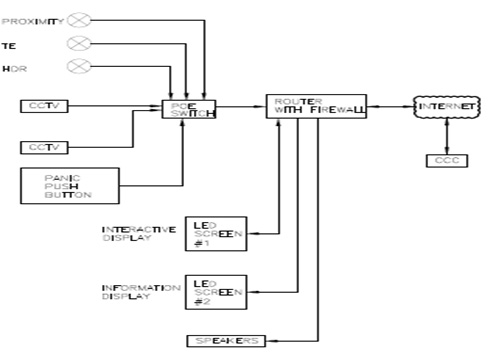