To BLEVE or Not To BLEVE

Accident at Pemex LPG terminal in Mexico City in 1984 is one of the worst disasters that the industry has seen. The facility owned by the government was a conventional large scale (54 storage tanks) LPG storage and distribution terminal which used to receive the LPG through a pipeline from a refinery situated about 400 km from the facility. The terminal was built in accordance with API specifications. While routinely filling one of the spheres, a drop-in pressure at the pumping station was noticed in the control rooms. Operators failed to identify the cause for this pressure drop. Emergency shut down was hence not activated. The cause of the pressure drop was a rupture in the 8” pipeline. The LPG released through the pipeline leak formed a gas cloud which was ignited by the nearby flare stack. In a matter of few minutes after the leak occurred, the terminal was under massive fire. Huge fireballs up to 300-meter dia followed the multiple explosions. Even though no safety procedures were bypassed, the blast destroyed the terminal completely killing ~500 personnel and injuring more than 6000. Fragments of tanks were found kilometres away from the site. Most of the explosions were BLEVE type. A lot has been investigated in this tragic case, and the industry has learnt many valuable lessons.

LPG is the most commonly used fuel and is bought in pressurised condition. At atmospheric conditions, LPG exists in gaseous state; however, it is liquified by compression and stored at ambient conditions in a liquid state in pressurised bullets or spheres. The operating saturation temperature in the pressurised condition is much higher than the atmospheric boiling point of the LPG. An external fire is a significant cause of failure that can result in rupture of storage tanks causing more damage. 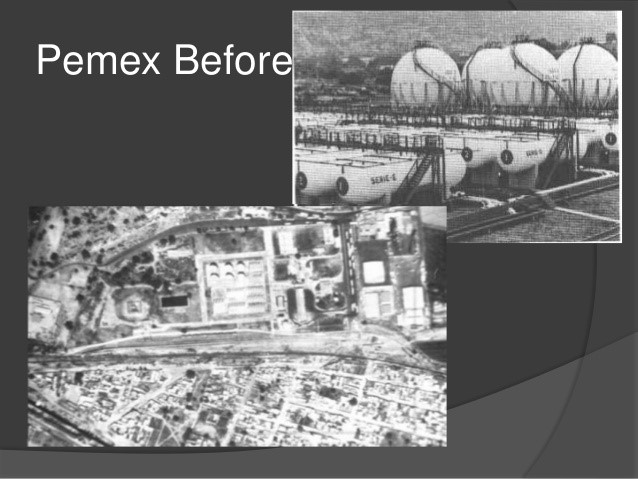 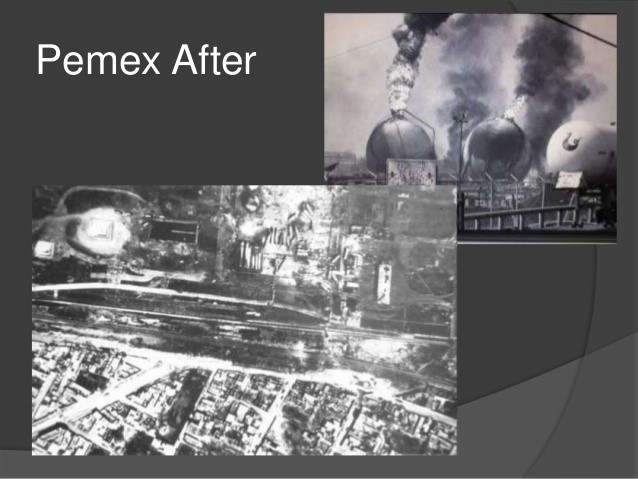 The tank receives heat input from the external fire. The vapour pressure inside the storage tank begins to increase and when it reaches the set pressure of the relief device, excess vapours are released through the safety device to a safe location. The inside wall temperature is cooled due to the expansion. The phenomenon of vaporisation and nucleation requires heat. The heat required for vaporisation is supplied by bulk of the liquid. Thus, the liquid temperature drops upon evaporation. As the safety device starts relieving the vapours, the inventory and liquid levels inside the storage tanks begin to drop. The area of the tank walls which remained cool due to the expansion thus becomes smaller. On continued release, most of the storage vessels metal walls are exposed to the dry heat again causing excessive thermal stress making the sphere prone to rupture. The pressure safety devices protect the tank from failure arising from over pressurisation issues, but it cannot protect the faults arising out of stresses developed due to heat gain from dry surface areas. Despite having a relief device sized for external fire scenario, the storage tank may eventually rupture as it cannot withstand the heat gained from external fire.

When the pressurised vessel or the pipeline ruptures, it suddenly causes the pressure drop; the pressure gets equalised with atmospheric pressure. Due to this sudden reduction in pressure, the liquid abruptly evaporates and expands to form vapour cloud. The volume of the vapour cloud is several hundred times higher than the original liquid volume due to density difference in liquid and gaseous phase. When the liquid temperature is higher than the superheated limit temperature at atmospheric pressure, the expansion becomes rapid and violent.

Boiling Liquid Expanding Vapor Explosion (BLEVE) is a specific scenario of pressure vessel burst failure applicable for the pressure vessel storing a liquid above its standard atmospheric boiling point. On failure of the storage vessel, the boiling liquid expands rapidly adding significant energy to the bursting event. The instantaneous, rapid and violent expansion of superheated liquid may lead to explosion and the flammable liquids get ignited. Overall, the events that follow are severe and catastrophic. The definition of a BLEVE presented by CCPS (Center for Chemical Process Safety, AIChE) is “a sudden release of a large mass of pressurised superheated liquid to the atmosphere.” The sudden release is due to an unexpected containment failure caused by fire, a missile, corrosion, a manufacturing defect, internal overheating etc.

BLEVE is one of the most devastating hazards and has caused incidents like Mexico LPG terminal accident.

Significant consequences of the BLEVE are

When the BLEVE is associated with flammable liquids (such as LPG), the gas-liquid mixture released from the explosion can catch fire and generate a fireball. The size and heat content of the fireballs is dependent on many parameters. The released flammable fluid mass may initially be existing above its upper flammability limits (UFL) and can burn only peripherally due to lack of air inside the mass. When the storage vessel or pipe ruptures, some of the fluid may leak in the surroundings, some may get carried along with the tank fragments and not all the leaked fluid contribute to the fire. In the Mexico terminal accident case, the fire spread due to the LPG that was carried along with the pieces of the ruptured storage vessel. The entrained liquid splashed on the ground forming a pool of flammable liquid at a distance away from the storage vessel. These liquid pools have a short residence time, and they initiated further pool fires.

When the initial fireball (above UFL) starts travelling, it becomes more abundant in the air due to air entrainment caused by turbulence. Simultaneously, liquid droplets in the released cloud mixture get vaporised because of heat from thermal radiation from the flame. The fireballs start becoming more substantial; the intensity of thermal radiation starts increasing. Higher the superheat inside the storage vessel, higher will be the fireball size and its radiation intensity.

At the design stage of the plant, “Inherently Safe Design” concepts need to be followed for addressing the BLEVE issues. A systematic design approach and design strategies should eliminate BLEVE possibilities. Though complete elimination is not practical, the consequences of BLEVE must be analysed to minimise the impact at ALARP (As Low As Reasonably Practicable) levels. A brief of some of the guidelines for BLEVE prevention are:

Maintaining Safe Distances from Potential Fire Sources: One of the fundamental root cause for the BLEVE is fire engulfment. Various regulatory requirements specify a minimum safe distance between the number of storage vessels handling flammable liquids to minimise the thermal radiation effects. The placement of the entire tank farm can be at a specified safe distance from the potential sources of fire.

Minimise Potential for Pool Fires: In case of BLEVE, the liquid may get entrained to the surrounding area and may form a flammable liquid pool. The ground area near the tank farm can be provided with adequate sloping ground for the spilt liquid to flow by gravity to a safe area away from any potential source of ignition.

Water Mist Barriers: The storage facilities should consider installing water mist barriers near the tank farm. In the event of BLEVE, the water mist barrier can help disperse the vapour cloud before it gets ignited.

Overflow Protection Systems: The relief devices are generally sized only for external fire/vapour release cases. The liquid relief cases may sometimes discharge the fluid in a knock out drum operating on flare backpressure. Overflow of liquid to the atmosphere from pressurised containers will cause rapid expansion. Adequate instrumentation with safety isolations must be considered to avoid possible overruns from the storage vessels.

Avoid Tank and Structure Failure: Besides external fire and spillage, there are several other causes that may lead to tank failure. Corrosion is one of the reasons for failing tanks. Corrosion monitoring programs such as painting and regular maintenance of healthiness of the container and associated structures must be performed. Though the relief devices are considered to be final controlling elements, they can also fail if they are not properly maintained. Relief valve ports can get plugged over time. The relief valves on the storage vessels must be periodically cleaned, tested and maintained to ensure tank integrity.

Water Deluge: An automatic water deluge spray system can get activated on the pressurized onset of external fire, thereby cooling the metal walls of the storage tank, preventing overheating of the surface that results in BLEVE. Water flow rate must also be adequately designed to maintain wall of water over the tank surface.

Auto Depressurisation: On noticing pressure increase in the vessel or on the onset of fire detection, automatic emergency depressurisation systems can be activated to relieve the vessel contents without waiting for the safety device to pop reducing the inventory (and temperature) in the vessel and in the event of tank rupture due to thermal stresses; flammable material is not released.

Mounded Facilities: Wholly or partially buried vessels provide better thermal insulation and may act to minimise impact of BLEVE. However, other issues such as corrosion need to be adequately addressed for mounded installations.

Fire and Gas Detectors: Adequate number of fire and gas detectors should be considered in the vicinity of the storage vessels; An automatic shut down and isolation of the system should also be considered on detection of fire or flammable gas. Such a shutdown system must have higher hierarchy in the control system configuration.

Other General Precautions: Suitable barricading can be considered to avoid movement of vehicles in the area near the storage tanks. All electrical and instrumentation systems in the tank farm area shall be suitably classified using applicable hazardous area classification code. Emergency response plans and teams, along with communication, means to nearby communities must be in place and must be appropriately maintained.

BLEVE is a potentially catastrophic phenomenon and is considered as a particular type of accident. Sudden failure of the pressurised storage vessels containing flammable materials can cause explosion releasing large quantities of material which further get ignited. The topmost concern for mitigation BLEVE damage is to prevent the initial incident from triggering higher-order subsequent events/accidents. Though engineering and advancement in technology help in modelling the BLEVE events; it is necessary to properly understand the BLEVE phenomenon and provide adequate mitigating measures at design stage.

Atul Choudhari with 28 years of engineering experience is the Chief Technology Officer at Tata Consulting Engineers (TCE). In this role, Atul’s primary involvement is in technology development, Innovation management and knowledge management. He has contributed several technical papers addressing a wide range of issues related to process design engineering both at national & international journals and conferences.