Hydrogen (H2) is stated as sustainable alternative energy to fossil fuels, especially in e-transport, the source of industrial energy and feedstock, and medium for energy storage. Generally, hydrogen is produced (about 96%) from fossil fuels like natural gas, crude oil and coal. Nowadays, energy producers mainly focus on carbon-free energy production systems to partially replace fossil fuel-based systems. Hydrogen is thus a clean-burning and emission-free fuel, which can be produced locally from fossil fuel or renewable energy sources [1].

Hydrogen is an alternative clean fuel being explored in new applications such as transport fuel, power generation, building heat and energy, iron and steel making via direct reduction of iron (DRI) process, and as an energy storage medium. Hydrogen can be combined with other chemical molecules to produce ‘hydrogen-based fuels’ such as synthetic methane, ammonia, synthetic liquid fuels and methanol. These can be easier to handle than pure hydrogen and can be used as feedstock in industry.

Several technologies have been recognised to produce hydrogen from non-renewable and renewable sources, as shown in Figure 1. 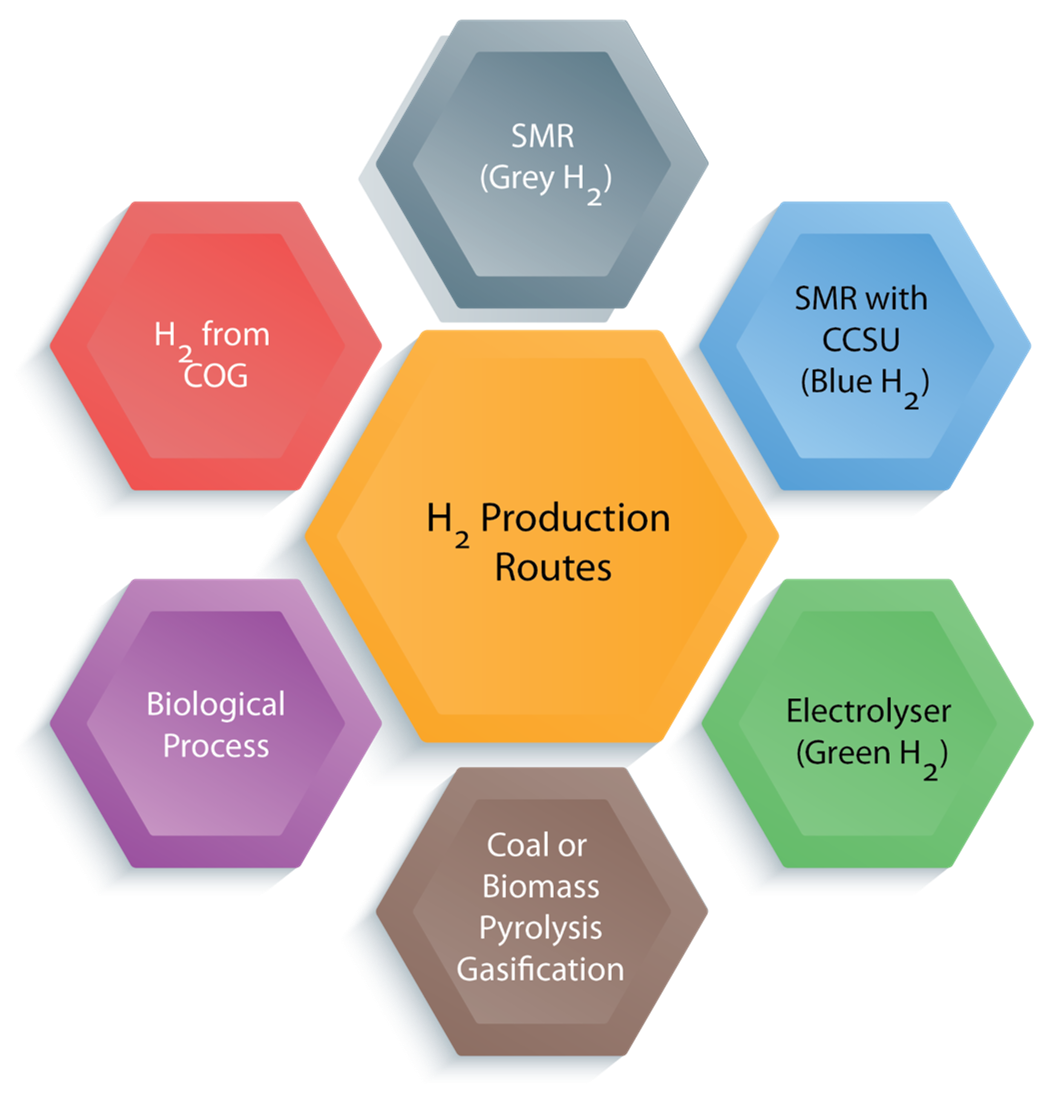 These are described below 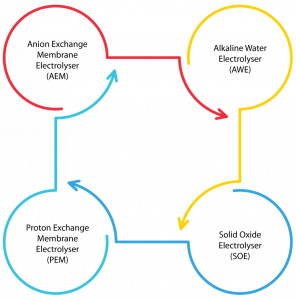 Globally, AWE and PEM Electrolyser operate both on commercial and pilot scales due to their technology maturity, durability and flexibility of low-temperature operation (<90 oC). AWE is a mature technology commercially available in the megawatt (MW) range, less expensive than PEM electrolysis. PEM is more beneficial than conventional alkaline electrolysis due to its smaller size, high purity (>99.99%), cleaner, more reliability, ecologically safe nature, and the possibility to produce at high pressure [1]. Currently, AWE and PEM are dominating the global market more than SOE. Typically, AWE and PEM consume specific energy consumption at 3.8 kWh/Nm3 and 4.53 kWh/Nm3, respectively.

Typically, these processes operate at ambient temperature and atmospheric pressure, which is a less energy-intensive process. However, they have few concerns like low hydrogen yield and rate production, pre-treatment, and high by-product generation. 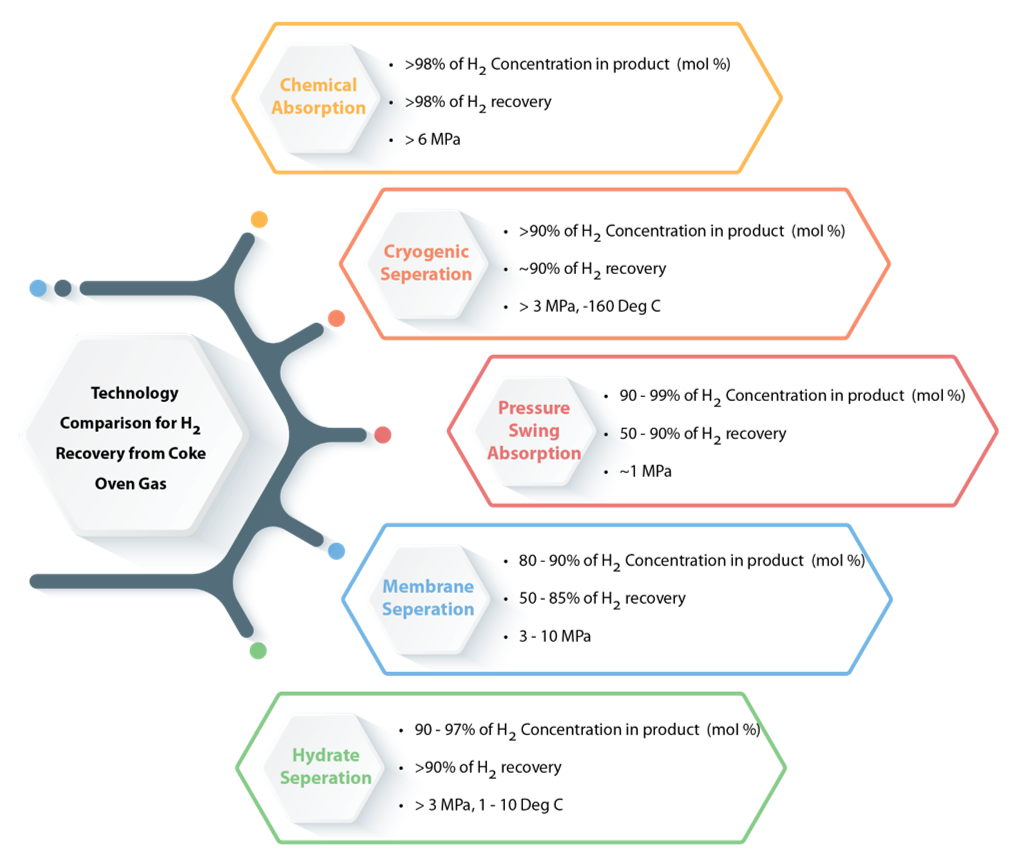 Technology development will progress in a series of scale-up steps such as (a) Bench or Laboratory Scale, (b) Pilot-Scale, (c) Demonstration Scale, and (d) Commercial Scale. Figure 4 depicts the current hydrogen production technologies and their TRL scale [4]. Generally, TRL 3, TRL 6 and TRL 7 have bottlenecks for further development stages. TRL 3 requires additional research funding for progression to the next step. TRL 5 and TRL 7 needs significant financial investment and/or commercial interest for the subsequent stage of development.

Electrolysis of water is one of the promising technologies nowadays, which has reached TRL 9, but it is available at a small scale to mid-scale. The technology of thermolysis and photolysis are innovative approaches under the research stage, which has TRL 1 – 2. The biomass technology’s thermochemical (gasification/pyrolysis) has reached TRL 7, which needs further investment to commercialise. Biological and electrochemical processes have less TRL (4-5 and 2-4, respectively), which requires a lot of research to improve the yield. 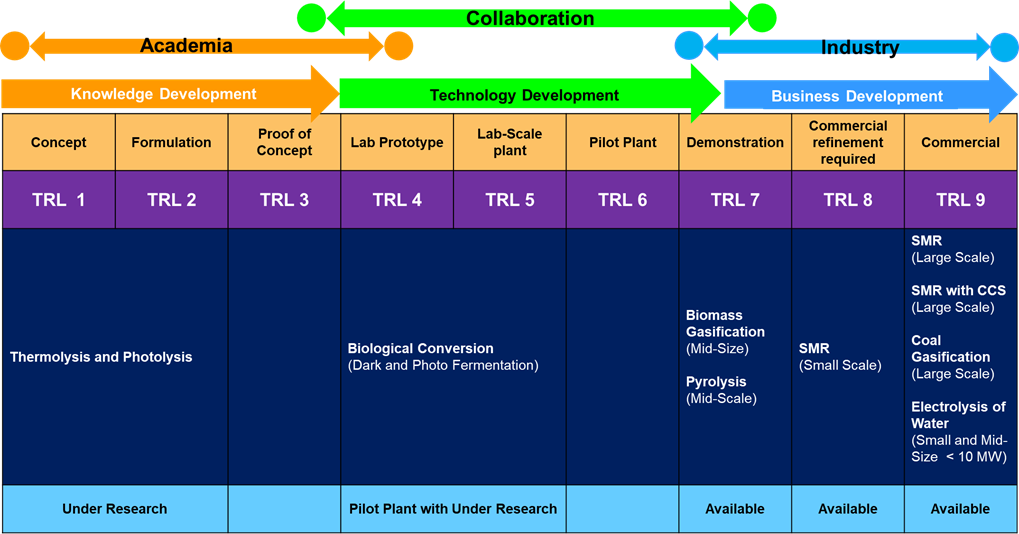 Generally, the cost of hydrogen is a function of the feedstock and operating cost to run the system. Typically, Capital Expensive (CAPEX) cost calculations include various components such as conversion units (like electrolyser, the balance of plant, stack replacement, project planning, deprecation period and interest rate). Operating Expensive (OPEX) costs includes direct operating costs of production (i.e., raw materials as water, specific electricity consumption, catalyst, KOH requirements, process steam, nitrogen and maintenance cost etc. are considered) [5]. Currently, SMR and coal gasification have the lowest hydrogen production cost (< 2 $/kg H2) due to existing large-scale infrastructures (TRL 9) and the low price of the feedstock. Biomass gasification and pyrolysis have reached TRL 7 at a mid-size plant. The hydrogen production cost is in the range of 1.21 -3.5 $/kg H2. However, it emits CO2, which is similar to fossil fuel feedstock. It has a few challenges, such as the type and quality of feedstock, reactor cost, and CCS systems combined with the processes. The water electrolysis process is an emerging technology to produce green hydrogen, but the cost of green hydrogen is high compared to the SMR process.

Hydrogen is emerging industrial energy and fuel as a clean and alternative source of fuel, which is fetching newer applications such as transport fuel, industrial feedstock, building heating energy, industrial energy and industrial power and stationary power generation. In this context, the hydrogen demand is also expected to increase, especially for ammonia and steel production and hydrogen-based vehicles. The expected hydrogen demand will be fulfilled by grey, blue and green hydrogen production routes. Engineering consulting firms need to play a significant role in this ambition to produce Grey, Blue and Green Hydrogen.

Dr S. Sakthivel is a Senior Technologist (Process) at Tata Consulting Engineers Limited (TCE) since 2009. He holds a BTech degree in chemical engineering, an MTech degree in Petroleum Refining and Petrochemicals (PRPC), and a PhD in chemical engineering from the Indian Institute of Technology Delhi (IIT-D). He has experience in process engineering, optimisation and development; technology analysis, screening and selection; techno-economic analysis; basic, applied and market research; laboratory and pilot experimental setup; process hazard analysis; planning and data management; and powder science and technology. He has published several research and technical papers in national and peer-reviewed international journals.