Piping Stress Analysis is commonly performed in various industries like Nuclear, Power, Oil & Gas and Process. This conventional analysis is simulated in computer-based software to analyse the effect of piping expansion on the system. During analysis, if any piping failures occur due to excessive stress, equipment nozzle load, flange leakage etc., suitable corrective actions are taken to resolve the same.

Nowadays, Space & Process Industries are on a business growth path, where cryogenic applications are inherent in the same. The thermal behaviour of Cryogenic piping is quite different from Non-Cryogenic piping due to its contraction and thermal bowing effect. Analysis of the same is more challenging and needs adequate technical skill & tools to address the same.

Like pipe expansion in conventional thermal analysis, pipe contraction occurs in cryogenic piping. The thermal contraction effect is commonly resolved by the flexibility analysis technique applied in conventional thermal analysis. However, the same approach would not be viable to resolve thermal bowing problems in Cryogenic piping.

In conventional thermal analysis, the pipe expands or contracts linearly along the pipe axis. However, during thermal bowing, pipe tends to show unique behaviour by forming the shape of a “Parabola” similar to the “Bow” commonly seen in the Archery Game. The effect of thermal bowing in piping is severe and challenging for very high bowing temperatures. Thermal bowing effects in the piping system can result in the failure of piping joints, supports, equipment nozzles, flanges etc. Hence, to address the same, the technical skill of conventional flexibility analysis, which addresses the linear behaviour of piping, would not be enough.

Thermal Bowing in Piping occurs generally due to its exposure to the Stratified Flow of Cryogenic Fluids. This phenomenon especially happens during the initial startup or loading conditions of Cryofluid in Piping. During the same, there is a high probability that the pipe is half filled with Cryofluid, as shown in Fig.1 (a). Due to the half-filled pipe, the bottom portion of the piping will have a Cryo temperature, and the top portion will have a different temperature. The temperature difference between the top & the bottom portion of piping is known as “Bowing Temperature”. This uneven temperature distribution across the pipe cross-section, as shown in Fig. 1 (b &c), induces bowing displacements. “Bowing Displacement” is the displacement of horizontal pipe between two support to move in the vertical plane, as shown in Fig.2 & 3. 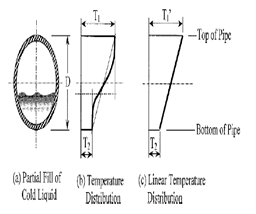 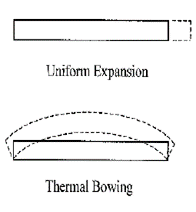 In one of the projects executed by TCE, stress analysis was carried out, and the Piping Stress model is shown in Fig.4.  The system had an extreme thermal bowing temperature of 234⸰ C for a pipe material ASTM A312 TP304L with the size of 400NB x 9.53Thk routed above ground & within the building. The piping system included branch connections, valves, flanges & specialities. There were challenges associated with routing the pipe inside the building due to adjacent facilities like structure, equipment, cable trays etc. 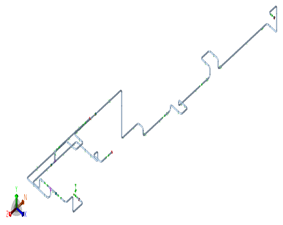 The software used for this project was Caesar-II. Other commercial software like Autopipe was also available with TCE to simulate the thermal bowing behaviour of the piping for various bowing conditions.

The solutions for thermal bowing can be obtained in various ways; however, optimised solutions for the problem can be arrived at by carefully studying various constraints in the project and would need technical skill and appropriate software.