Modelling of Structure and Design Loads

Stair towers attached with structural building or technological structure are generally analysed by combining the stair tower with the main structure in analytical space frame model. In case of retrofitted stair towers supported on process equipment, as the equipment design is under the scope of equipment vendor, the stair tower needs to be analysed separately. In this case the space frame for the stair tower structure has been modelled in Staad pro software. The process equipment is not modelled but the sway of the equipment is applied as loading at the tie locations for the analysis. Loading has been calculated based on Euro code and the same is applied in the analysis. To include the effect of base level supporting bracket flexibility, the bracket is also integrated with the stair tower analytical model. The details of the structure and bracket support are shown in Fig.-1. 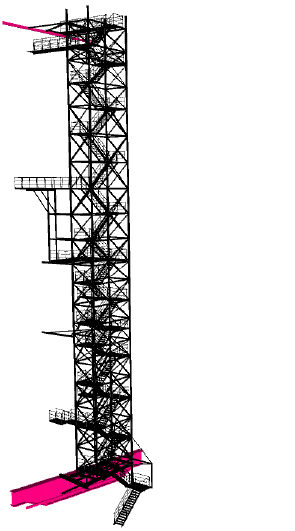 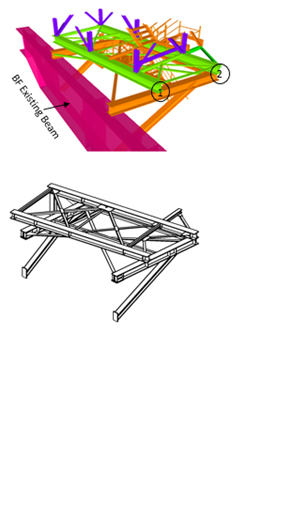 Stair tower supporting bracket at base level is supported on an existing BF structure beam. Supports for the bracket are considered as pinnedconnections. Lateral tie member connected with BF structure has defined sway value as received from equipment vendor. This specific forced displacement is modelled as load in the analytical model by assigning the supports as enforced type in Staad and generating one basic load case for each lateral direction (X & Z) support displacement.

Two separate analysis models with same member sizes are analysed and compared to get the response in stair tower frames only due to wind load on stair tower along X & Z direction. One model is without any horizontal tie system and the other model is with horizontal tie system at 100m elevation. The tip deflections for the model without top level tie are 900mm in X-direction and 3400mm in Z direction as against values of 50mmand 120mm respectively for the member with tie. values are represented in Figure 3 & 4 graphically for all four column grids of stair tower structure.Thus it is observed that the 50m high tower is not feasible as independent structure without lateral tie, as the sway value is beyond acceptable limit. There will be requirement of lateral ties at various levels with the process equipment to keep the tower sway values within allowable limit and at the same time to maintain economy.

Model in Case-1 is supported on bracket at 50m elevation, with ties provided at 74m and 100m elevations.

Model in Case-2 is supported on bracket at 50m elevation, with one tie at 74m elevation.

Model in Case-3 is supported on bracket at 50m elevation, with tie at 100m elevation.

The simplified schematic models are shown in Fig. 2. At all tie levels support displacement loads along x & z directionare applied.

At stair tower base level, the tower supporting bracket will exert reaction on the existing 2770 deep beam at 4 support locations. For comparison study, support reactions from the stair supporting bracket for Cases 1 to3 are analysed. It is observed that in case 3 the reaction values are much higher in most of the ULS combination. Hence it is not efficient option for the purpose. Further comparison study done between Case 1 & Case 2. To perform the comparison between Case 1 & 2, support reactions at 74m elevation are analysed. It is observed that the horizontal force values at 74m tie location are higher for case-2 as compared to Case-1 in most of the ULS combinations. Thus it is inferred that case-1 is most efficient option.

Due to limitation of erection space availability, erection crane capacity, crane boom length and duration of erection, modular construction is to be adopted. Modular construction concept will reduce erection time and labour cost. The whole stair tower under consideration is divided into six modules as shown in Fig.-4, based on the handling limits received from erection contractor and transporter. Members of each module are assembled at fabrication yard, then the modules are transported to site and all modules are connected through bolt to each other at site by column splicing.

The different erection stages of the structure will not match with the design conditions applied for the in-place analysis of the complete structure. Therefore, it is required to perform construction stage analysis depending upon the sequence as well as various stages of erection. Basic wind speed for the construction stage analysis considered as per section 3.1(5) of EN 1991-1-6:2005. As per code, the basic wind speed value has been considered for erection duration up to 3 months.

For erection, it is required to lift the modules to place at proper location. Lifting plan of the modules to be decided jointly with the erection contractor. Accordingly lifting analysis and design is carried out for each individual module.

From the erection and lifting analysis there is requirement of some additional temporary members which may be removed after completion of erection.

Results from the Parametric Study

By connecting the stair tower with process equipment, the tower structure sway pattern becomes integrated with the equipment sway. Hence it is not required to check the sway limit of stair tower as independent tower after connecting with lateral ties.

From the results of the parametric study it is found that independent stair tower of 50m height resting on flexible base is not feasible and will not meet deflection/ sway criteria. Hence ties at various levels are required and to ensure compatibility of deflection of coupled structure, sway values of BF structure at the various tie levels are obtained from OEM (Original Equipment Manufacturer) and applied as displacement load input to the stair tower model. The tie members are designed for the ensuing axial forces and vertical shear forces and the connections are designed accordingly to transmit the forces at the interface. There will be vertical movement of the process equipment due to thermal load which also being taken care of in the detailing of lateral tie member connection.