A site specific case study is required to be carried out with the use of simulation softwares for selection of most optimum voltage level for the Metro Rail traction system. The analysis covers the max Peak hour peak direction traffic (PHPDT) that can be catered by a particular traction, cost of traction system, cost of rolling stock, civil infrastructure cost etc.

Overhead Catenary System (OCS) - It consists of a 25 kV conductor running along the entire route of the metro. The arrangement of “OCS” is depicted in Figure 1 below

Third rail system – A third rail runs along the tracks for supply of DC power. The arrangement of “Third rail” is depicted in Figure 2 below 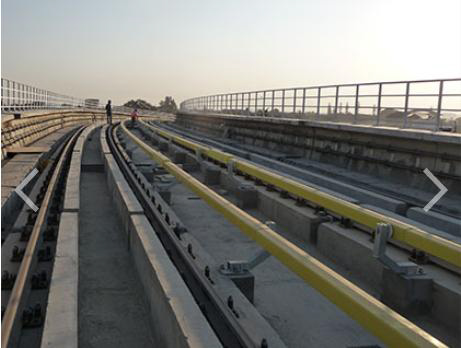 For providing uninterrupted services, the power distribution for metro is provided with adequate redundancies at each level from source to load; such as provision of standby equipment, ring networks etc. Standby generator is provided at all stations to feed essential loads in case of failure of the normal station power supply

For control and monitoring of the entire metro rail system, a centralised control center is provided as a separate building. All systems of the RSS, TSS and ASS are monitored and controlled at the OCC through SCADA. Building Management System is provided for controlling and monitoring of Station MEP Equipment such as Lighting, Lifts, Escalators and HVAC system.

Mesh type / dedicated earthing is provided at each sub station for earthing of equipment and structures to achieve the step and touch potential within safe limits and to achieve the overall earth resistance as per statutory requirements. TCE can offer services for master planning and infrastructure works of a metro rail project