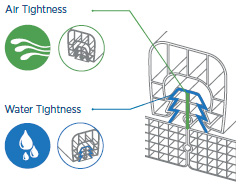 Engineering the best electrical auxiliary power scheme for power plants is an area requiring critical evaluation. The choice between Station Transformer Scheme and Generator Circuit Breaker (GCB) Scheme may be decided upon, through a cost benefit analysis based on the prevailing constraints and plant requirements. It is prudent to decide on the scheme with  either a Generator Circuit Breaker or a Station Transformer based on a techno -commercial analysis, especially in large power plants, as this has the potential for huge cost benefits – more so with the current availability of new technologies which have led to reduction in the price of GCBs.

It a common practice in power plants to provide Generator Transformers, to step up the voltage of the generated power before it is evacuated into the Grid. The process of generating electricity consume a small percentage of power called auxiliary power. In large power plants this power is usually drawn from a transformer called a Unit Auxiliary Transformer (UAT) connected to the generator terminals. However during the start up of the unit this power will not be available and hence, a separate transformer called the Station Transformer is provided that enables drawing of start -up power from the grid. This Station Transformer (ST) also meets the power requirements of common station services such as Coal Handling plants, Ash Handling plants etc.

Power plant auxiliary scheme comprising of “Station Transformers Scheme” were widely prevalent in the past owing to non availability of suitably rated GCBs for large power plants. The main factors that hindered the wide application of GCBs were the large Load/fault currents and the DC components in the fault currents. These factors rendered the cost of GCB capable of handling such large currents prohibitive. The advancement in the manufacturing technology of GCBs in the recent past has resulted in considerable reduction in cost of GCBs.

Design engineers have now the option of choosing either “Station Transformer Scheme” Or “Generator Circuit Breaker Scheme” for large power plants. However a careful techno-economic analysis should be carried out before choosing better of the two options considering Size of the plant, number of units in the plant, Voltage of source of start-up power etc.