CO2 is a greenhouse gas and to reduce greenhouse effect, the CO2 emissions need to be controlled. Large scale industrialization has increased amount of CO2 that is being released to atmosphere. This is contributing to the global warming. It is therefore important that this CO2 is captured at sources e.g. thermal power plants & cement industry, etc. and preferably converted into other useful products, say other chemicals. Worldwide, there are many readily available technologies for CCS (carbon dioxide capture & sequestration) which are implemented at many industries. The captured CO2 can be stored in safe places like under sea level, which is economically expensive process. Instead of expensive sequestration of CO2 like storage in sea bed, it may be attractive to pursue new technologies that can reuse this CO2 to make useful chemicals. Besides economical benefits, the socio-political benefits help creating in a positive image for companies who adopt policies of reusing the generated CO2 from fossil fuels.

“This paper discusses various technologies that can utilize CO2 for manufacturing of chemicals such as ‘synthesis gas derived’ products (like methanol, urea, etc), sodium carbonate and polycarbonate based plastics.”

CO2 as feedstock is widely used for commercial production of many chemicals (methanol, urea, salicylic acid and bicarbonates & carbonates), materials (metal carbonates) and for fuel (syngas) etc. In industrial environment, CO2 is emitted in the form of flue gas from oil refineries, petrochemical processes, cement, Iron & steel plants and power plants etc. The utilization of CO2 can be categorised in two ways such as ‘direct’ and ‘indirect’ utilization. Direct utilization means CO2 is not taking part in any chemical reaction but is directly applied in the processes. Indirect route converts CO2 through chemical reactions. There are many ways to use ‘direct’ CO2 such as food & beverages like soda water, neutralization of waste water or effluents, welding, semiconductor cleaning, fire extinguishers, solvents for pharmaceutical industries, enhance oil recovery (CO2-EOR) or enhancement of coal bed methane production (CO2-ECBM) and cleaning of clothes & solvent. Other category of ‘indirect’ way of CO2 is used as raw material for the production of chemicals like methanol, urea & syngas, polycarbonates, as shown in Figure 1. 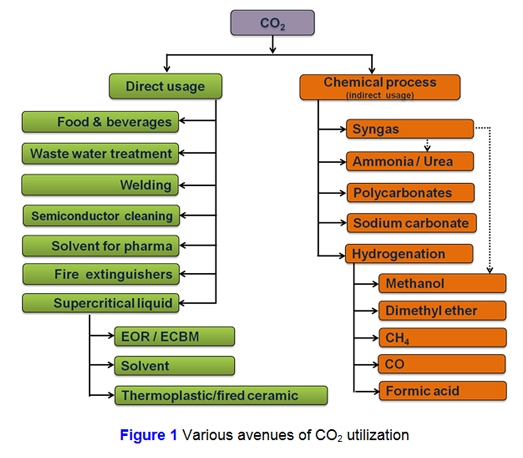 The following concepts are used for production of valuable products from captured CO2.

Syngas is conventionally produced by natural gas/naphtha reforming or from gasification routes. This syngas is further utilized to make various chemicals like Methanol, Ammonia, etc. When CO2 is available either from captured source or otherwise, it can be used to produce syngas by direct reaction with methane. Dry reforming of methane (DRM) with CO2 (also known as dry reforming) is an alternate method of producing synthesis gas (mixtures of hydrogen and carbon monoxide). The reaction takes place at high operating temperature and low pressure and is carried in presence of with Ni containing or noble metal supported catalyst such as Pt, Rh, Ru and Pd. DRM is a unique process of methane reforming, and has greater potential for carbon formation, primarily due to the lower H/C ratio. The dry reforming reaction may be represented by:

The dry reforming process becomes industrially advantageous especially when compared to the steam reforming or partial oxidation processes for syn gas production. This is due to close to 1 product molar ratio of H2/CO. This low product ratio of H2/CO is suitable for further use in Fischer-Tropsch synthesis process, which produces long-chain hydrocarbons. Some economic analysis studies indicate that dry reforming of methane can be a competitive process with lower operating and capital costs in comparison with steam reforming with assumption of negligible cost of CO2 import.

The major demerit of dry reforming is that high operating temperatures (800–1000°C) are required to reach desired conversion levels due to the highly endothermic nature of the basic process. The dry reforming consumes 1.6 times more energy than the steam reforming. The DRM also gives significant production of by-products like coke, which are deposited on the surface of the catalyst and it reduces the life of catalyst. There are a few challenges for the industrial application of the reforming of methane with CO2 such as capture, storage & purification of CO2 and development of catalyst material with a very low coke formation rate. Further studies are required for optimization of process conditions in order to minimize operating costs.

At present, commercial methanol is produced from fossil fuel – derived syngas in presence of catalyst containing mixture of copper, zinc oxide or gallium supported on alumina at high pressure (~5–10 MPa) and high temperature (220-300oC) by direct oxidation. Methanol is used widely as a basic building block, e.g. in production of formaldehyde, methyl tert-butyl ether (MTBE) and acetic acid and other usage for plastics, plywood, paints, explosives, and permanent press textiles. It is also being considered as an alternative fuel for IC engines.

Recently, alternative route is indentified and demonstrated for the production of methanol. It uses H2 and CO2. The source for CO2 could be either captured from flue gases coming from natural gas boilers or from steam reformer or by reductive conversion of CO2 with H2. The total stoichiometric amount of CO2 required is 1.38 ton per ton of methanol production. There are two main reactions occurs in the reaction of hydrogenation of CO2 as follows

Large-scale pilot plants for production of methanol are commonly based on sourcing of the CO2 from CO2 capture technologies and hydrogen from renewable route. Such processes have been implemented in Iceland, Japan and Korea. Cost of hydrogen plays an important role in economic feasibility of dry reforming process. The hydrogen is prime raw material and its contribution to the total production cost of methanol is more than 60%. Unlike the above mentioned pilot plants using dry reforming process, if the hydrogen is obtained through steam methane reforming process, the overall production costs of making methanol from CO2 will be high. Thus, sourcing of raw materials play vital role in commencement large scale commercial production of methanol from captured CO2. The raw materials prices of H2 and captured CO2 are too high, hence financially viability of this process is difficult, unless, integrated with existing plant capturing CO2. Furthermore, the other challenges of this process include purification and transportation of the CO2 and H2 from industrial plants site.

Urea (NH2CONH2) is produced from ammonia (NH3) and gaseous carbon dioxide (CO2) at high pressure and relatively high temperature via well-known conventional process. Urea is mainly used as fertilizer and in polymer synthesis. Generally, CO2 is produced during the manufacture of ammonia from coal or natural gas or naphtha. The production of urea involves the formation of ammonium carbamate (NH2COONH4) through an exothermic reaction, which is dehydrated to form urea as show in the equations below. The overall reaction falls under exothermic, though the second one is endothermic

The captured CO2 from sources like natural gas boiler & steam reformer can be utilized to increase the yield (‘yield boosting’) in urea synthesis. The recovery of CO2 is used for urea production in Indian Farmers Fertilizer Co-operative Limited (IFFCO) – Aonla and Phulpur units and Nagarjuna Fertilizers and Chemicals Limited- Kakinada, Andra Pradesh.

This process is not economically viable due to raw material costs of hydrogen and capture costs of CO2, But NASA planning to use this technology in Mars for conversion of other planetary CO2 atmosphere into methane and water for fuel and astronaut life-support systems.

The major emitters of CO2 like cement & power industry should consider on CO2 utilization by integration of valuable products production plant. The following products also can be produced from captured CO2.

While various alternatives are available for converting CO2 into useful chemical products, there are many challenges involved. These include sourcing of CO2 and its purification in an economical way, addressing the low reactivity of inert molecule like CO2, Ensuring cost competitiveness of such technologies as compared to the conventional processes etc.

Nevertheless, this area is still expected to get increased attention due to ill effects of increased CO2 emissions and resultant global warming.

Dr S. Sakthivel is a Senior Technologist (Process) at Tata Consulting Engineers Limited (TCE) since 2009. He holds a BTech degree in chemical engineering, an MTech degree in Petroleum Refining and Petrochemicals (PRPC), and a PhD in chemical engineering from the Indian Institute of Technology Delhi (IIT-D). He has experience in process engineering, optimisation and development; technology analysis, screening and selection; techno-economic analysis; basic, applied and market research; laboratory and pilot experimental setup; process hazard analysis; planning and data management; and powder science and technology. He has published several research and technical papers in national and peer-reviewed international journals.