Conventionally in most of the thermal power plants, ash from the Economiser (ECO) and Air Preheater (APH) hoppers will be evacuated in slurry form and mixed with the Bottom Ash (BA) which is also extracted in slurry form for further disposal. The ECO and APH ash will not be mixed with Fly Ash (FA) as these are course and not useful for manufacturing the cement.

In one of the projects executed by TCE, the entire ash generated was to be handled and disposed in dry form. The evacuation of Bottom Ash (BA) was done by dry type mechanical system. The evacuation of ash from ECO and APH was also planned to be in dry form. The Bottom Ash generated in the boiler furnace is large in size due to clinkerisation. Hence, it is necessary to extract the BA from the BA hopper using the mechanical equipment. This is further crushed to the smaller size and stored in the BA silo for further disposal in dry form by trucks.

The ash collected in the ECO and APH hoppers are course fly ash. These need to be evacuated by the pneumatic system. The ECO and APH ash could not be sent to Fly Ash silo to avoid mixing of these ashes with Fly Ash. It was decided to divert the dry ash from ECO and APH hoppers to the BA silo instead of installing another silo for that purpose. 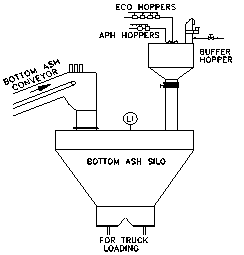 The combination of mechanical handling of BA and pneumatic handling of ECO and APH ash and collecting them in one silo was done for the first time. There was no precedence for this type of system in any of the thermal plants. The system was conceptualised and engineered by TCE. This system is operating successfully. With this arrangement, there was substantial saving of cost to the customer, as a separate silo for the ECO and APH ash was eliminated.