The recent revision in environmental norms issued by MOEF made it mandatory for thermal power plants and process industries to measure mercury emission in air .Hence it is impervitive that proper understanding of mercury measurements technology and its availability in market is essential for the implementation of mercury measurement mechanism in plant

This paper makes an attempt to bring out the availability technologies and their commercial usage for mercury measurement and monitoring.

Mercury is found   in environment in various distributed & different forms. Elemental mercury vapor is found in atmosphere, while inorganic & organic form of element is found in soil, water, plants & animals.   Natural sources of mercury are from forest fires, volcanoes and weathering of mercury bearing rocks. However large amount of mercury gets   liberated to atmosphere through various human activities like combustion of  fossil fuels , incarnation of solid waste , mining etc ,

A Toxic metal mercury exists in coal.   Mercury is volatized and a portion    of volatized mercury is absorbed in unburnt carbon and ash, when coal is combusted.. They are   captured along with   particulate matter.

So, It is difficult   to predict   and also complicated to characterize the Mercury emissions during coal combustion.    In vapor phase volatile mercury is thermodynamically stable   at high combustion temperature and at low temperature major portion of mercury gas absorb into ash and oxidized compounds in flue gas  and form mercury compound after reacting   with mercury vapour

During the combustion, the mercury in the coal is liberated   into 3 forms – particle bound mercury,  elemental mercury and  oxidized mercury.

Dry sorbent methods are very popular   and used for measuring mercury concentrations and speciation. Wet chemical method (Method 20 US Environmental protection agency (USEPA )) is a relatively complex method and also costly . USEPA has developed a mobile mercury monitor toolkit based on   Sorbent trap popularly known as Tool kit in Large TPP. These are now generally used by regulators and the researchers. In sorbent trap sampling system, mercury is collected inside a  trap that is filled with a sorbent medium such as iodated   carbon. The collected sample is analyzed using traditional wet chemical methods or by thermal decomposition/ direct combustion. This OH method (Ontario Hydro method) is a choice in measuring mercury concentration and speciation.

This   system   involves   continuous and   repetitive   stack sampling, using paired sorbent traps in subsequent analysis as time integrated samples.  This system can be a primary system for compliance monitoring and as back up during CEMS maintenance & verification of performance.

Online   CEMS is     used for real   time monitoring and analysis.

The popular advanced techniques   used are

The working principle of above online mercury monitoring is similar to other flue gas monitoring emission systems. Objects to be analyzed are taken by sampler from flue gas .The   interferential components available in sample gas such as HCI, SO2, SO3, andother acidic gases are removed before going to detector

It is widely accepted   methods   for determining mercury i.e total mercury content. Mercury is reduced to elemental form  for by using  Tin Chloride or Sodium borohydroide   From solution, vapor mercury is purged by air, nitrogen or argon carrier gas.  After   it passes through gas liquid separately, it is led into optical path of atomic absorption spectrometer.

These analyzers use a electrode less   discharge lamp EDL as light source which is driven by high frequency. Extremely narrow band width emission   lines are generated by lamp which is congruent with mercury atom   absorption lines .

CVAAS is primary technique for analyzing mercury. These   instruments have peristaltic pump   that transports   sample & stannous chloride separately  into gas liquid , where pure dry gas (argon) stream  is introduced into  liquid mixture to release mercury vapour  . Mercury shall be carried by dry argon gas   in vapour phase through dryer and into  atomic absorption optical cell. In absorption cell, the elemental mercury will absorb the light at 253.7 nm in logarithm which is proportion to its actual concentration of the sample.

The sample is introduced by peristaltic pump and stannous chloride into gas liquid separator where   pure dry argon   gas stream is  bubbled through a mixture to release mercury vapor.   This technique uses unique characteristic of mercury that allows measurement at room temperature.

The mercury is transported in carrier gas through a dryer   and then to a valve which selects   between fluorescence & pre concentration approach. In the detector mercury vapor absorbs   254.7 nm and fluorescence at the same wavelength. Fluorescence signal is the measurement at 90 deg to incident beam to minimize scatter from excitation source. The intensity of the fluorescence light is directly proportional to the concentration of mercury.

The Gas flow path consists of strong bypass stream from which for a sample preparation a  small partial stream is extracted  by a built in gas transfer pump. The 2nd   pump extracts the partial stream and sends it to reduction step & amalgamation unit. All the components in contact with gas are heated electrically   to high temperature.

Mercury chloride compounds are reduced to elemental mercury by wet chemical reduction process with SnCl2 solution within reduction vessel. Excess condensate is removed by peristaltic pumps & feed in reductant  solution. This sampling gas   is conducted into the gold trap after   processing.

During this  process  a defined sample gas volume  is conducted through gold trap, so  metallic mercury forms an amalgam with gold. Gold trap is heated electrically and in collection phase they are released and later transported through photometer cell by inert carrier stream of gas. In this amalgamation technique interferences of other flue gas components are avoided  since analyzer is in contact with mercury & carrier gas 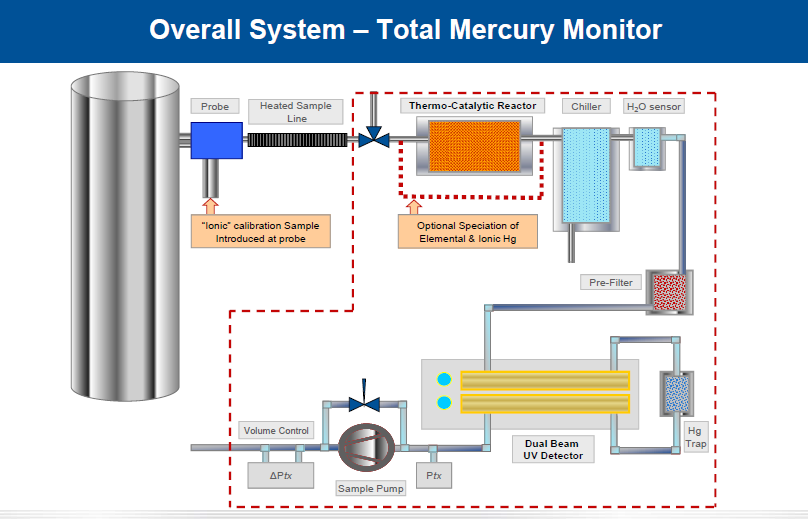 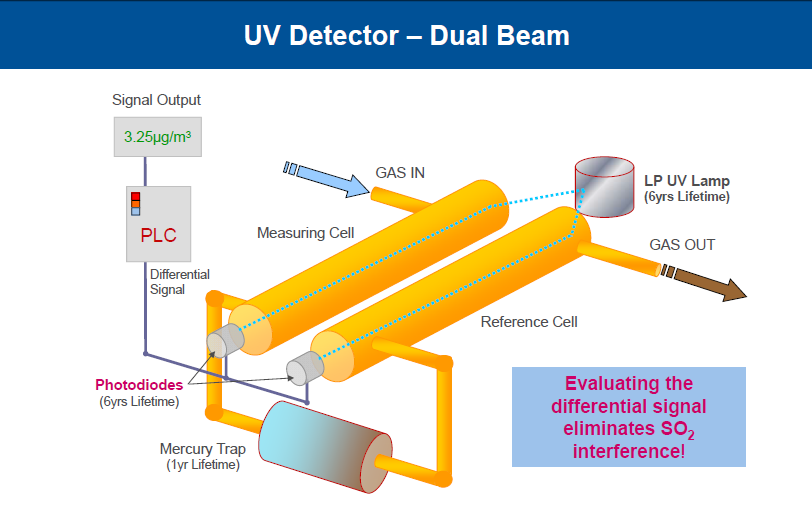 The continuous mercury monitors shall meet these following needs:

India has already revised to more stringent emissions norms to embark as the road map of improving energy efficiency and reduce emissions. However, it is imperative that following mercury control strategies to be taken in current scenario in Indian context to improve & reduce emissions.

As could be   seen, both offline   and online measurement techniques are available for mercury measurement & monitoring. Application   for offline and online system would depend upon the extent of mercury emission expected from particular industry, severity of its impact on environmental and prevailing environmental regulations.